This year’s students from my “Introduction to Computing” course from Master of Data Science program at BGSE wanted to know a bit more about my setup for coding, what text editor I use, packages, etc. Initially I meant this to be a description of how to set up the Sublime Text editor for coding, so that I have a resource I can point the students to for all the details. However, whole discussion was actually about adopting practices that would make coding more efficient, so it made sense to write a bit more broadly and mention other things I picked up along the way that facilitated my life in front of the keyboard.

Taking another step back, my specific goals biased the choice of practices and tools. I’m not a professional programmer, I’m a researcher that relies a lot on computing. My aim was not necessarily to adopt the latest industry standards, but to satisfy my scientific computing needs and ensure that my research results are reproducible. In my opinion reproducibility is a foundation of good research, hence I have focused a lot on discussing practices that facilitate achieving this goal.

Why Linux? Most important advantage in my opinion is that Linux relies less on graphical user interfaces and induces solving problems programatically, with commands that can be easily placed in a script. In other words, it induces adopting solutions that are reproducible. In contrast, Windows excels at point-and-click interfaces, since it is geared for normal users that do not have coding-specific needs and reproducibility goals. It’s not like Windows cannot be used for coding and computing, of course it can, but it does make the job a bit harder, making the computing tools less accessible.

Then there are servers and clusters that I often rely on for any serious computing task. Servers as a rule run on Linux and my life is much easier if I connect and work with servers from a Linux machine. There is also an added security benefit, at least for the time being, while the community is still too small to be an interesting target for cyber-gangs. Last but not the least, I am happy to be part of the open source movement!

Tip: I find it useful to keep track of the programs I’m installing on the machine in a shell script. That way I can easily recreate my operating system, whether on the same computer, or mirroring my setup on another computer (e.g. to keep things equal between my personal and work computer).

Choose a text editor and learn it well

When I was taking my first steps in programming I was relying on language specific integrated development environments (i.e. IDE’s). Matlab, the first serious language I started using (I don’t count STATA, beloved tool of economists), comes with a great IDE. It was a great experience using it, but the issue has arisen when I started learning R and Python. I used a different IDE for each one of these, Rstudio for R and Spyder for Python, each coming with a different set of shortcuts and their own idiosyncratic interfaces. It’s easy to see that this was not an efficient setup.

Somewhere along the way I have read about a solution for this inefficiency - find a powerful text editor and use it for everything! One of the best advices I have attended to. This way I ended up learning one editor well, avoided mental load associated with switching between editors and gained in productivity immensely.

There are quite a few good text editors that are versatile enough to be able to use them for any task. Fans swear by Vi and Emacs, and it’s fun to read fiery discussions about which one is better on Reddit and elsewhere. I find them a bit arcane and somewhat unfriendly, but it’s worth checking them out. I opted for Sublime text 3. I use it for every text-based task, for programming in languages like R, Python, C, or JavaScript, and for writing scientific articles, i.e. pretty much everything I do on a computer except for browsing the Internet. Note that it is not a free software. You can use the full version but every once in a while a pop-up window will appear asking you to buy a licence ($80). You can safely ignore it though. After some time, out of gratitude for improving my work life considerably, I did buy the licence. 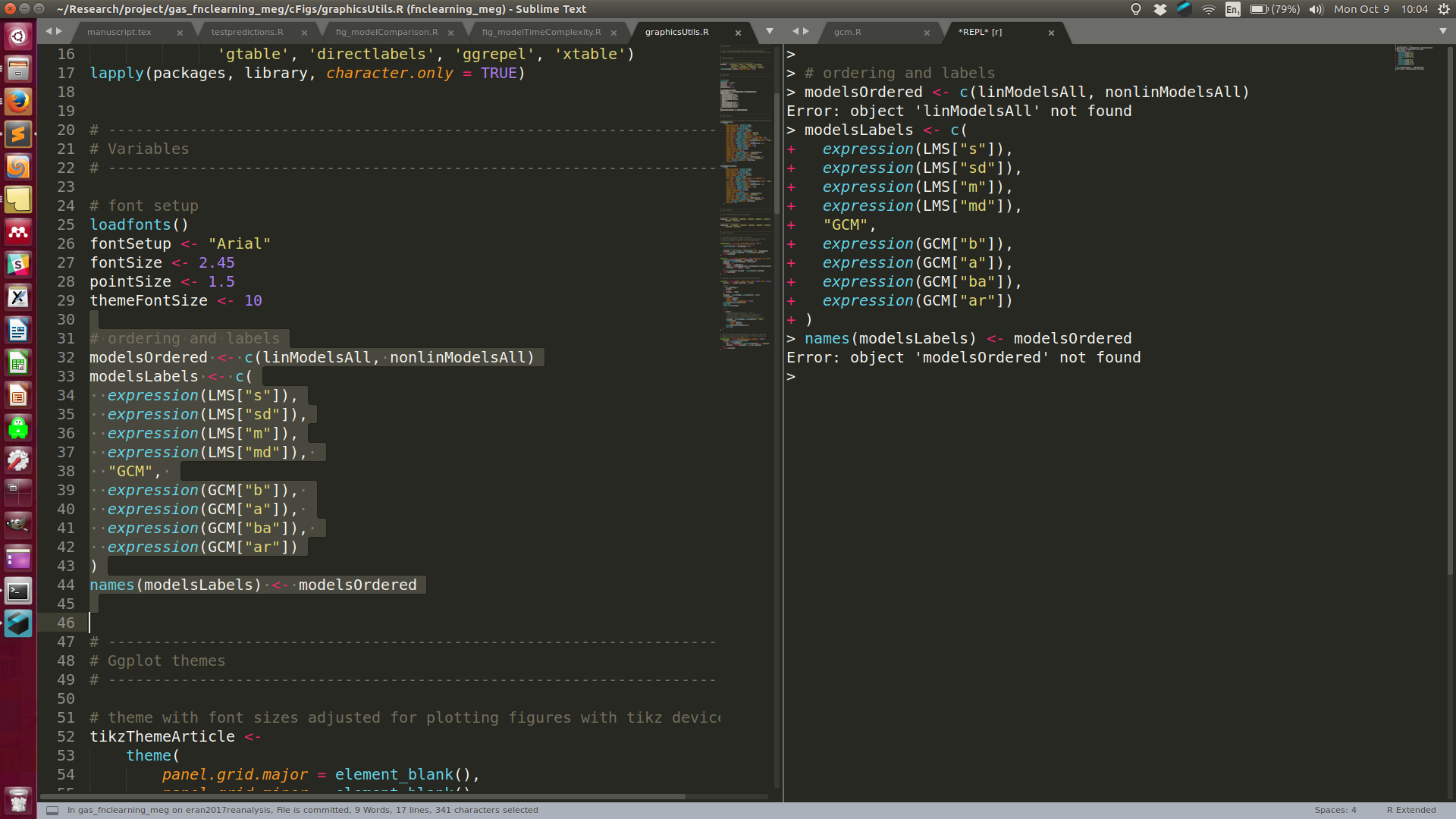 Setting up the Sublime Text

In its basic form, Sublime text is a good, cool looking text editor. It has quite a few features I cannot work without any more. For example, in auto-completion of words or whenever doing some search (in its menus, within text etc), it uses fuzzy search, i.e. you don’t have to type the exact phrase to find a piece of code or text. Another feature I like is multiple selection, you select a piece of text, press CTTRL+D and Sublime will select the nest instance of that text.

Arguably the best aspect of Sublime is that it comes with a sizeable ecology of packages. These packages make my life much easier. To access all these packages, what you will need to do first is to install the package manager. Once that is done, press CTRL+SHFT+P and start typing install packages, a corresponding option will appear and press ENTER. This will open a list of all packages that you can install. Here is the list of packages I use on pretty much every day basis.

Version control to the rescue! There are several version control softwares, but I have tried only git, which has served me well so far. Linus Torvalds has initially developed Git for collaborative effort of developing the Linux kernel - it allows multiple users to work simultaneously on the code of the same software project. It is also the software underlying the GitHub, a popular public software repository.

Most of the time I am using git locally and I am a single person developing the code for my research projects. Even though this usage mode exploits only a fraction of git’s capacity, there are many benefits that made it worthwhile paying the cost of adopting it into my everyday work.

As with any tool there is some cost to pay. Git takes a bit of time to learn and getting used to it. Git works well with plain text files - files with code are fine, but MS Office type of documents are not. Many researchers are still heavily relying on MS Word, so this might be a no go for them.

I won’t go into any details on how to use Git, there are enough tutorials on the Internet - for example, check the official website (git-scm.com), it has good explanations and useful examples. I’ll give two tips though.

GNU Make to automatise everything

Command line is great because I can combine a series of tools to create a single analysis pipeline script (e.g. Bash script). For example, I can download the data from some URL with wget, call Python to do some data cleaning or text processing, then call R that will generate some good-looking figures and finally compile the manuscript written in LaTeX. This greatly improves reproducibility as all the steps in the project automated scripted and ideally I can reproduce whole pipeline by executing a single script. Having notes on what you do in each step is fine (e.g. a Readme file), but documentation is sometimes not updated, while a script should be correct.

Instead of a bash script, what is usually used for these purposes is a command line tool called GNU Make. It is essentially a Bash script with slightly different syntax, where some additional checks are performed to make the computation more efficient. I can specify dependencies between the files and script will re-run the code that has been changed, not everything, as would be the case in a simple Bash script.

Below is a simplified example of a makefile file that I have in every project directory where my manuscript sits. For example, if I would change the code for the figure, next time I execute the makefile (simple make in the command line in this directory would do the trick), make would realize the figure script has changed and would first update the dependency. I would have a similar makefile on the top level that connects all the steps of the analysis pipeline.

Use the same project file organization throughout

At some point I ran into an excellent course by Karl Broman on “Tools for reproducible research”. He had a really good advice on organizing files on a hard disk - choose a scheme for organizing all files related to a project and apply it consistently for every project. His argument was that you should reduce the time spent on searching for files. Having adopted such standardized approach to project management I have to say that indeed those savings accumulate. 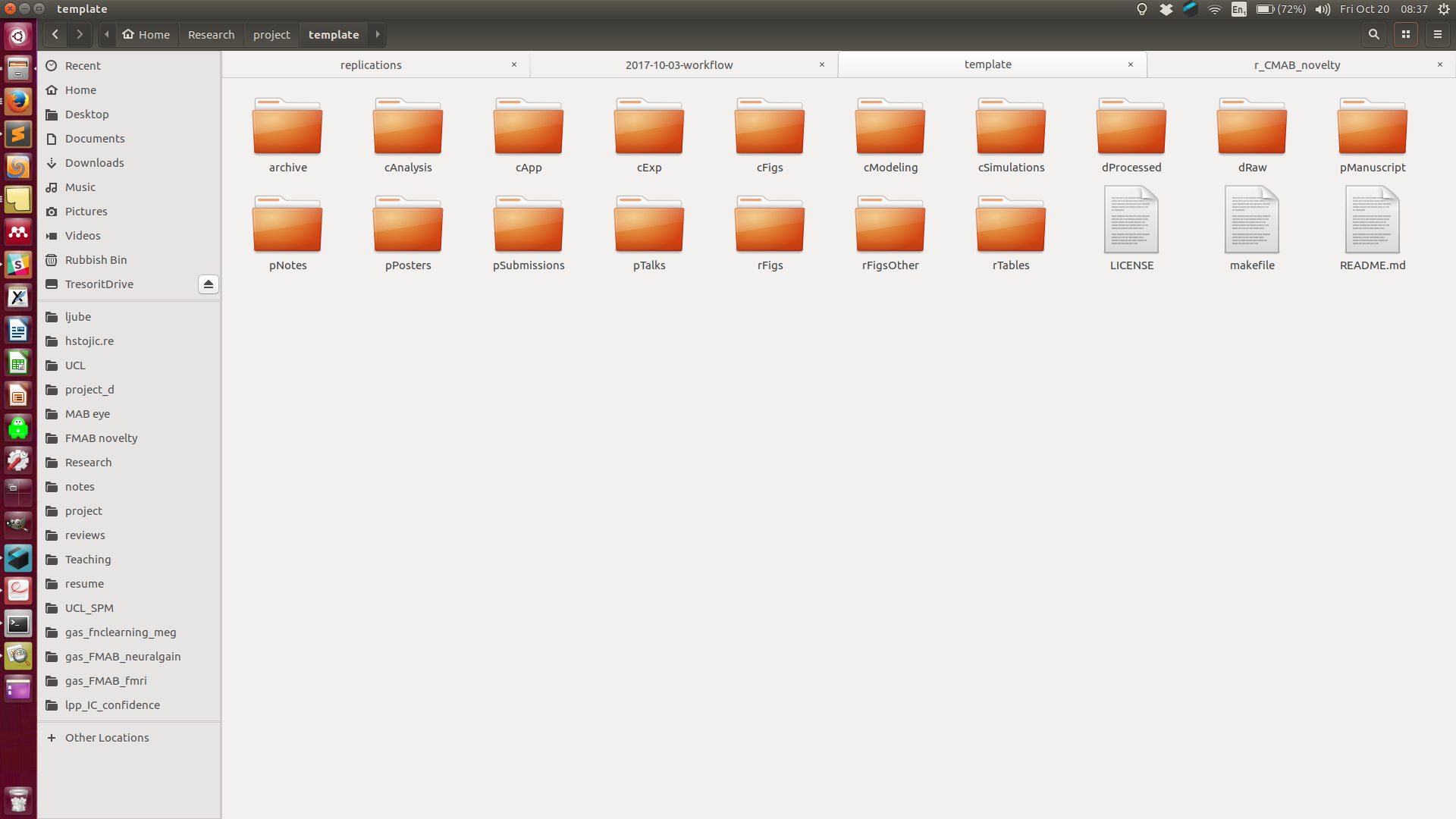 This is how I organize my project files. All materials relevant for a project is in a single directory/folder on my harddrive in projects/ directory.

I don’t keep all of my projects in the parent projects/ directory. To reduce the clutter I place retired projects (compressed) into an projects/archive directory and half-baked ideas into projects/play directory.

Organisation is somewhat different than Broman’s, but what matters is having some system that is applied consistently. Version control helps a lot. For example, I usually need slightly different figures for talks or posters and then I can easily create new branches of the repository where cFigs code is appropriately adapted, and same goes for creating different journal submissions, public version of project files etc.

How we do science is changing and increasing number of reviewers and journals are requiring authors to publish all the files relevant for the project - analysis code, code for generating the figures, raw data etc. This is a good thing. Article published in a journal is not the only research output. Other people can reuse the code and data for different purposes, extending the impact and making science as a whole more efficient. I know that I would had been grateful for having access to such material, my learning curve during the PhD would have been much different with it. With a standardised project organisation and planning to open the files from the outset it will be far easier to make it happen.

Use meaningful file and directory names

Smart usage of directory and file names can reduce search time further for yourself, and especially your collaborators or users.